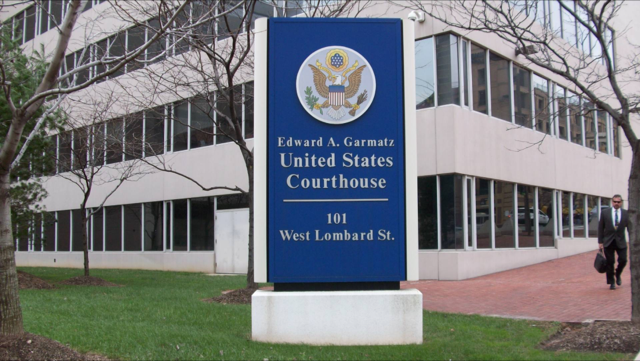 The hearing on Monday, August 7, 2017 before federal District Judge Garbis on the State's Motion To Dismiss lasted almost two hours and was very interesting.

The Judge did not issue any ruling from the bench, so the issues addressed await further order from the Court.  Our main argument was that the Court should not entertain the State's motion until we had been accorded an opportunity for discovery.  By the end of the hearing, Judge Garbis may have been convinced, asking the parties how long they would need for discovery.  In other comments from the bench, Judge Garbis seemed taken aback by the reality that the one-shot HQL regulations issued by the State Police effectively meant that Baltimore City residents would have to travel outside the city in order to get the HQL.  He also appeared quite interested in our argument that the HQL statute use of "receive" was vague and thus a violation of the Due Process Clause.  Judge Garbis was open-minded and asked excellent questions of counsel.  We were pleased to have this opportunity to present our arguments and look forward to a ruling.  Mark W. Pennak, President, MSI

Module Version <> CBSubs version.
Click here to become a member of MSI or to donate.

Maryland Shall Issue has joined the AGC!

MSI is now an AGC club!

Maryland Shall Issue, inc. is proud to announce that it has formally joined the Associated Gun Clubs of Baltimore (AGC) as an Associated Club. Therefore, anyone who is a current member of MSI in good standing is eligible to purchase an AGC range badge upon completion of a range safety orientation. This is an important benefit for members as the AGC range is one of the finest shooting facilities on the East Coast.

In this case, the appellant, Holmes Whalen, was denied a carry permit by the Maryland State Police and that denial was sustained by the Handgun Permit Review Board.  Mr. Whalen challenged that denial in circuit court, contending Maryland's "good and substantial reason" requirement for a carry permit was unconstitutional and that prior Maryland precedent have been superseded by subsequent Supreme Court holdings.

RT @2Aupdates: "We find that (1) the right to keep and bear arms is a 'civil right,' (2) Illinois has a regulatory mechanism to restore tho…

Virginia is seeing now what Maryland saw with the Firearms Safety Act of 2013. Simple ignorance. https://t.co/cj52JvTBkI

"The bill was originally scheduled for a hearing at 1 p.m. Wednesday (1/15) in the Senate Budget and Taxation Commi… https://t.co/8CmjXFsAZh