A Decision More Than Four Years in the Making, But No Jury Trial Date Yet

CASE SUMMARY: This lawsuit against Maryland Capitol Police Sgt. Brian T. Pope for violating the civil rights of two MSI members continues to progress in the U.S. Court of Appeals for the Fourth Circuit, where the case has been briefed. This briefing includes an amicus curiae (“friend of the court”) brief filed in March 2022 by the National Police Association on behalf of Sgt. Pope.

A U.S. District Court ruling in April 2021 denied qualified immunity to Sgt. Pope for his arrests of Jeff and Kevin Hulbert on the public sidewalk in front of the Maryland Statehouse in February 2018, and ordered this lawsuit to proceed to a jury trial on our claims.

However within days, in May 2021, the State filed a motion for reconsideration before the District Court and subsequently, an interlocutory appeal to the US Court of Appeals for the Fourth Circuit. An interlocutory appeal, also known as an interim appeal, is one that is permitted at an intermediate stage of a case, either before a trial is commenced or a final resolution is reached. Interlocutory appeals are allowed by the Federal Rules of civil procedure only in specific circumstances, such as in this case, when there has been a denial of qualified immunity in the Court below. Their motion for reconsideration argued that Sgt. Pope should not have been denied qualified immunity by the District Court, asserting the Hulbert brothers’ arrests by Sgt. Pope were proper and that Kevin Hulbert’s video and audio recording of the police was not a “clearly established” First Amendment right. The Fourth Circuit would later remand the case back to the District Court for it to rule on the motion for reconsideration. That Court denied the motion and the State filed an appeal to the Fourth Circuit.

We now await a decision by the U.S. Court of Appeals for the Fourth Circuit. With the Court now fully briefed as of May 2022, the Court may rule on our pending motion (filed in February 2022) to dismiss the State’s appeal without further briefing or oral argument.

Alternatively, the Court may order the parties to appear before a three-judge Fourth Circuit panel in Richmond, VA for oral argument; that panel would then rule on the State’s pending appeal.

IN MEMORIAM: Sadly, Jeff Hulbert, the lead plaintiff in this case, passed away on May 3, 2021, after a lengthy and valiant battle against cancer. Jeff’s daughter, his twin brother Kevin and other family members helped care for Jeff during his final days and were with Jeff at his bedside when he passed.  We at Maryland Shall Issue send our deepest condolences to the family and friends of Jeff Hulbert.

Jeff was an outspoken and stalwart proponent of individual rights and a fierce supporter of the Right to Keep and Bear Arms. Jeff founded Patriot Picket with his brother Kevin in 2016. Patriot Picket "hits the bricks" of public sidewalks in Annapolis, throughout Maryland, the surrounding states, and the District of Columbia with stylized signs and pointed political messages in promotion and defense of those rights.

Please keep the Hulbert family in your thoughts and prayers; we will continue to remember and honor Jeff as this case progresses. 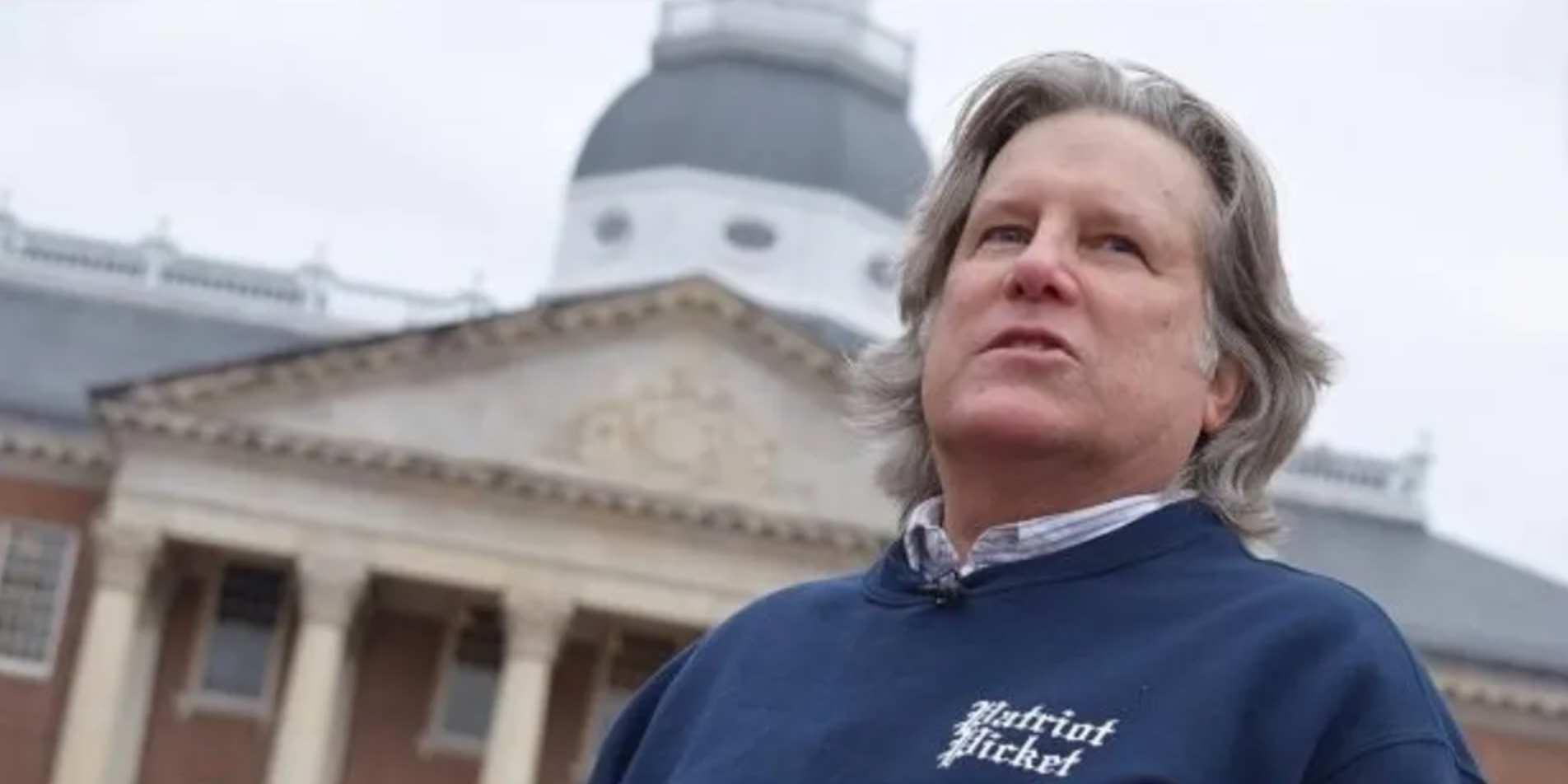 NOTE: Jeff’s passing does not end his association with this lawsuit. Jeff’s estate, administered by his brother Clayton, continues as a plaintiff. Clayton was appointed by the Court in July 2021 to represent Jeff’s estate in these proceedings, and at that time the legal title of this lawsuit was changed. Whereas Jeff was originally named as the lead plaintiff in this case, Clayton’s name now appears first for the plaintiffs in the revised case title as this lawsuit moves forward:

“CLAYTON R. HULBERT, as personal representative of the Estate of Jeffrey W. Hulbert; KEVIN HULBERT; MARYLAND SHALL ISSUE, INC., for itself and its members …”

CASE HISTORY: On the evening of February 5th, 2018, while holding edgy signs (with five fellow members of “Patriot Picket”) criticizing the powers that be in the General Assembly (and video-recording the demonstration and the approach of Maryland Capitol Police), two Maryland Shall Issue members were detained and arrested by Maryland Capitol Police Sgt. Brian T. Pope, handcuffed and then searched by him and other Maryland Capitol Police (MCP) officers on the Annapolis City sidewalk in front of the historic Maryland Statehouse.

Sgt. Pope had ordered them to move their peaceful, Constitutionally-protected sign-picketing demonstration from their chosen location on that public sidewalk to an area inside the adjacent Lawyers Mall, where the visibility of their signs and a banner to passersby would be obstructed by thick shrubbery growing in nearly waist-high planter boxes in Lawyers Mall.  Lawyers Mall itself is within the Statehouse grounds, and the use of it at that time required a permit.

Jeff and Kevin Hulbert refused Sgt. Pope’s order to leave the public sidewalk because neither nor their signs were blocking or obstructing the few pedestrians passing by them on the sidewalk: 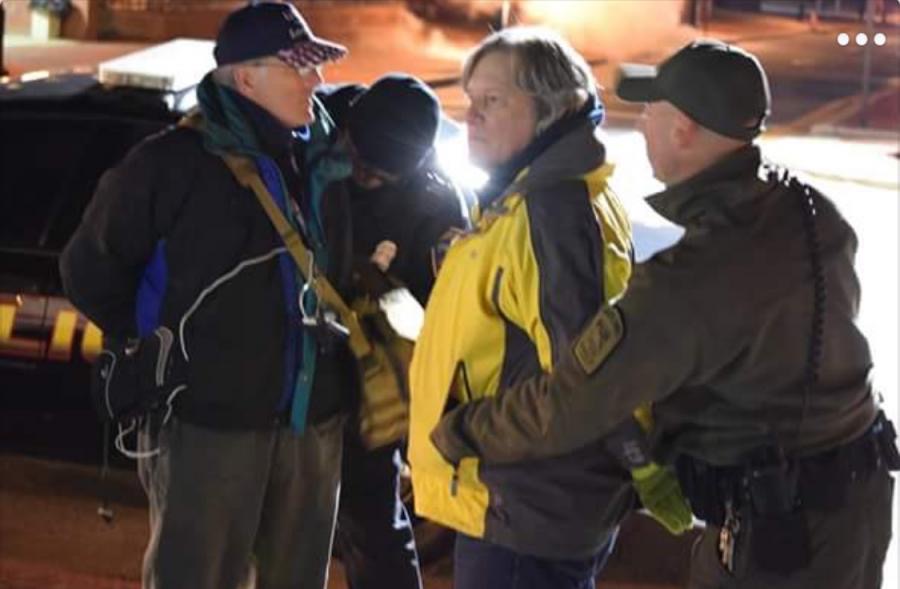 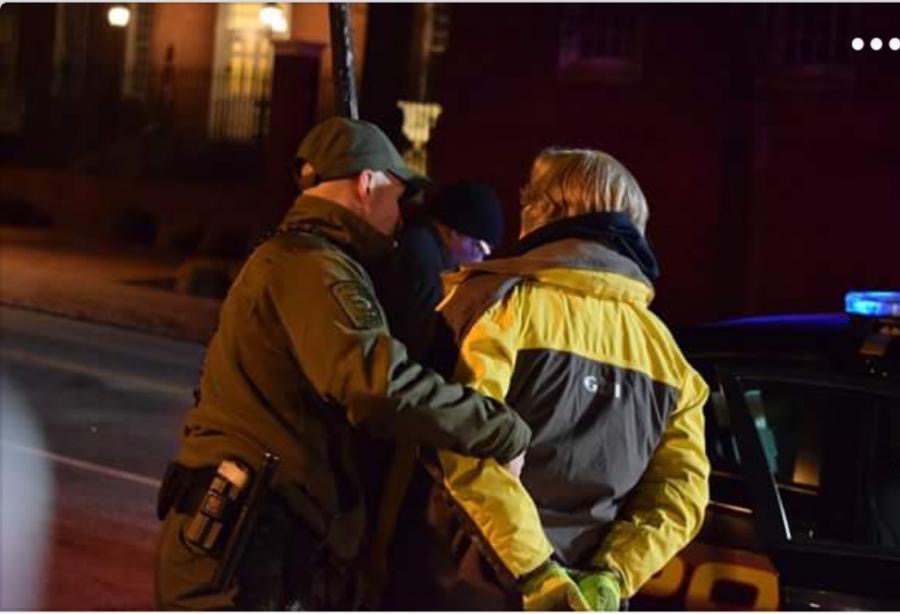 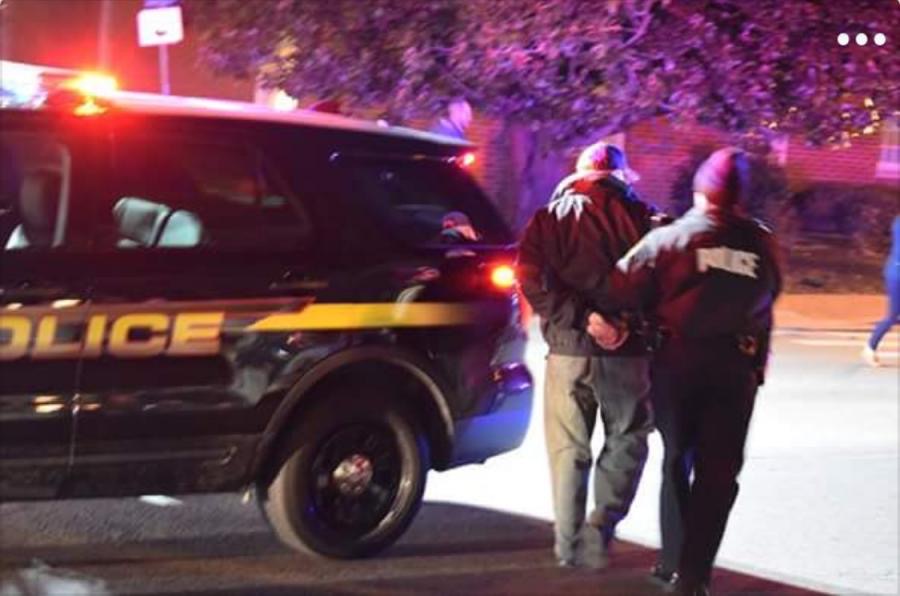 Jeff and Kevin Hulbert were transported separately by MCP officers to an Annapolis City PD precinct; escorted inside still in handcuffs, they were each then handcuffed to a steel bench in a booking room; they remained handcuffed until the issuance of criminal citations to them by Sgt. Pope, before being released.

Two additional criminal citations were issued to each of them the following day, also by Sgt. Pope, on orders from MCP Chief of Police Col. Michael Wilson, who was present and personally ordered that the additional citations be signed on the trunk of an MCP patrol cruiser parked at the foot of the Maryland Statehouse north steps, in full view of the public: 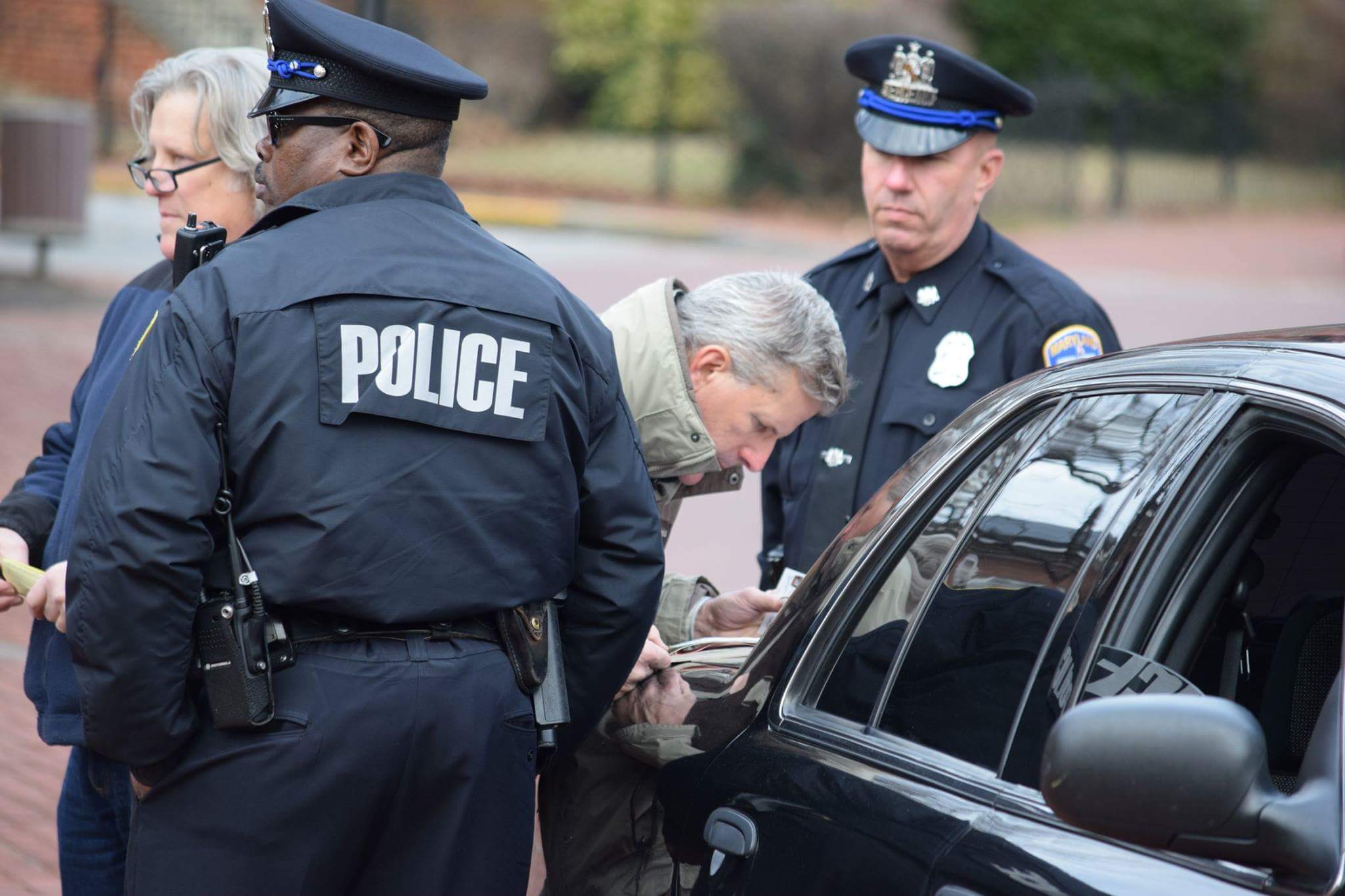 Portions of the video below were recorded by Kevin Hulbert of the sign-picketing demonstration the previous evening at the very moment Sgt. Pope approached the group to order the Hulberts and the other sign picketers to leave the sidewalk.

(Kevin Hulbert’s First Amendment right to record this video has become a key element in this lawsuit: the State argues on appeal that Kevin Hulbert had no “clearly established” right, by any precedent declared by the U.S. Court of Appeals for the Fourth Circuit, to record police in the public performance of their duties.)

The video below also depicts the arrival of additional MCP and Annapolis City PD officers, the subsequent arrest of the Hulbert brothers, and the issuance of the additional criminal citations to them the following day: 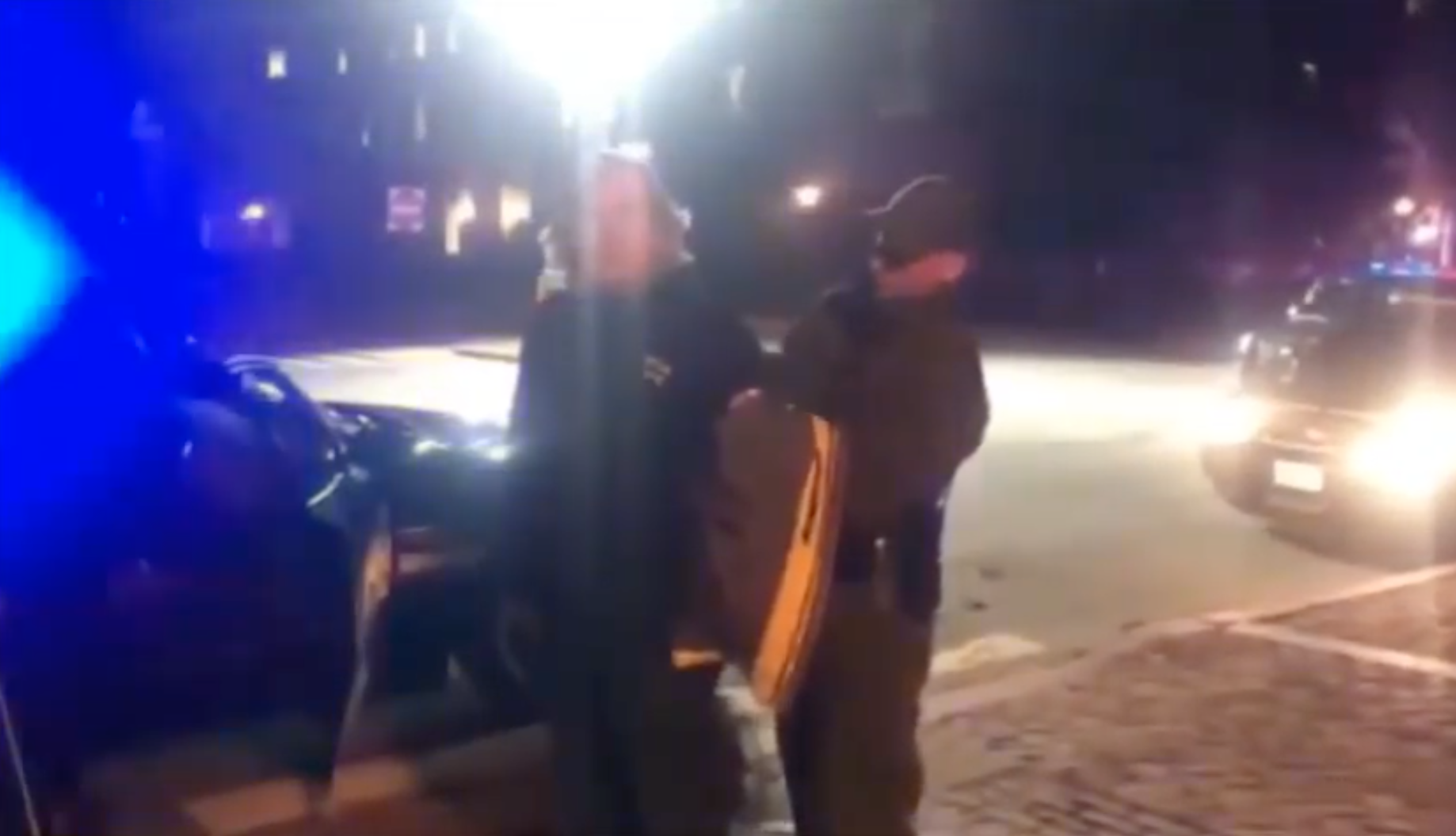 Within days Jeff and Kevin Hubert retained the distinguished Maryland civil rights attorney Cary Hansel of Hansel Law; joined by MSI (for itself and its members) as co-plaintiffs, a civil rights lawsuit was filed only nine days later in Federal District Court in Baltimore for the violation of their First Amendment and Fourth Amendment rights.

Jeff Hulbert, depicted below in the Hansel Law conference room, displays a set of the three criminal citations issued to both him and his brother Kevin by the MCP following their arrest: 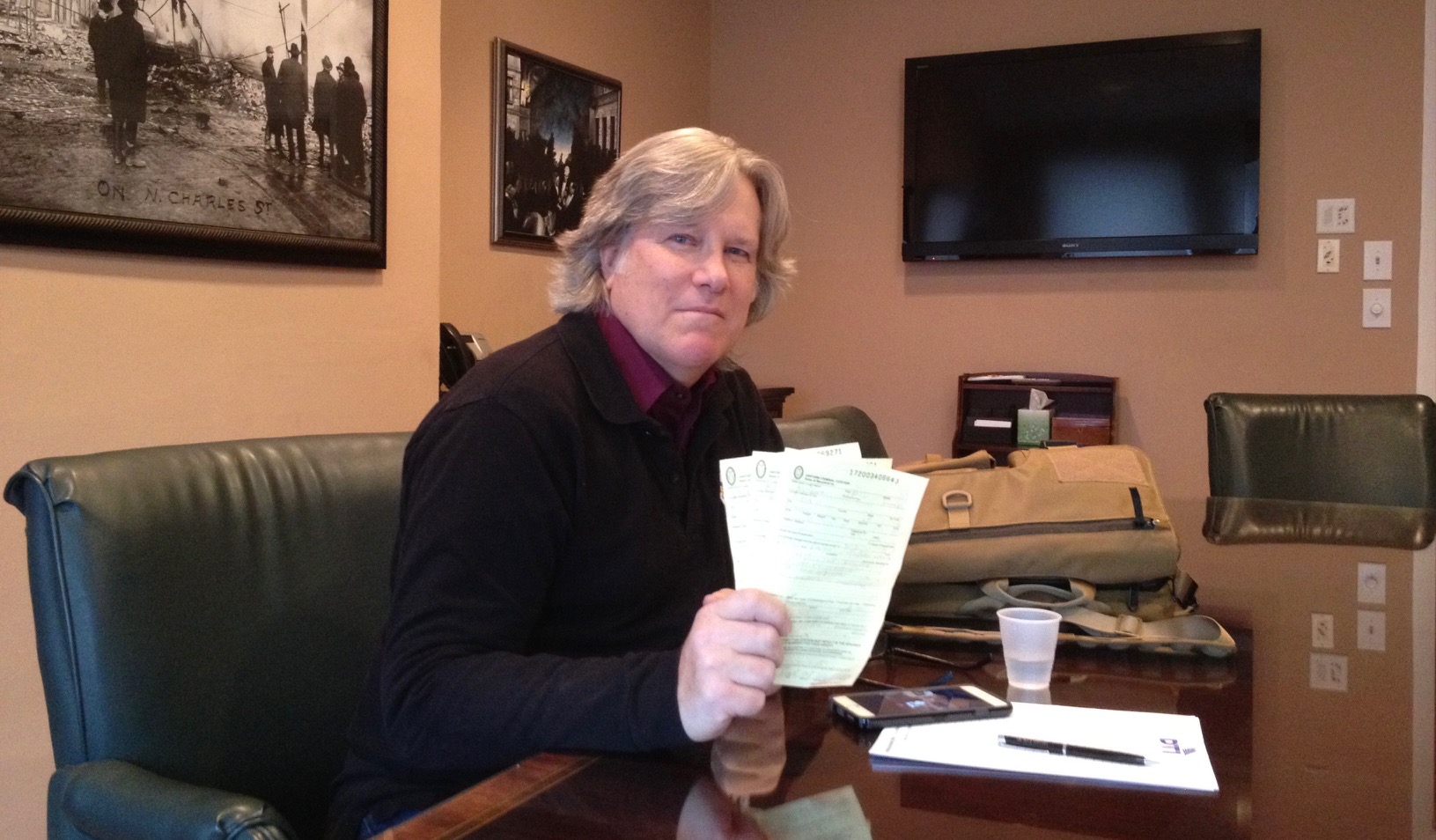 The arresting officer, MCP Sgt. Brian Pope, and the MCP Chief of Police Col. Michael Wilson, were named as defendants in our lawsuit; they are both represented by counsel from the Maryland State Attorney General's Office.

In an opening gambit, the defendants first moved to dismiss the complaint for failure to state a claim, but that effort failed when the District Court didn't buy it. Then a lengthy legal discovery process ensued, which was further delayed by the COVID pandemic.

That discovery showed that the arrest of the Hulbert brothers that night could be traced to a call from the Governor's mansion requesting MCP to move the group because the "mansion" did not want to be bothered with questions or attempts at conversation by the Patriot Picket demonstrators.

Everyone, including the two MCP defendants (as well as other officers from the Maryland Capitol Police and the Maryland State Police), admitted in their court-ordered depositions during discovery that these orders came from the "mansion," but, amazingly, no one at the "mansion" could identify who gave the orders. We did discover that such orders happen as often as twice a month, or whenever someone at the "mansion" decides that the "mansion" does not want to deal with completely peaceful protestors lawfully exercising their First Amendment rights. We can only speculate as to the identity of this "mansion" person.

When discovery was finally completed, defendants once again sought dismissal, this time through a motion for summary judgment. That effort likewise failed on Friday, April 23, 2021, when the Court issued an opinion denying the State's motions for summary judgment on our First Amendment and Fourth Amendment Constitutional claims.

The District Court held that there were "disputed issues" of fact that precluded summary judgment on our First Amendment claim (unlawful interference with the First Amendment right to demonstrate on the public sidewalk) and the Fourth Amendment claim (the arrests were made without probable cause of any crime) by the MCP arresting officer, Sgt. Pope.

In so holding, the District Court also held that there was a "clearly established" First Amendment right for Kevin Hulbert to record video and audio of the police in a public setting, and that disputed issues of fact precluded summary judgment for the defendants as to whether Sgt. Pope's arrest of Kevin Hulbert interfered with that right.

Finally, the Court rejected the State's argument that MSI should be dismissed from the lawsuit on standing grounds. The District Court did dismiss (wrongly in our view) the counts against the MCP Chief of Police, Col. Michael Wilson.

So, presuming we prevail at the U.S. Court of Appeals for the Fourth Circuit, a jury trial in District Court against Sgt. Pope is next. That will take time to happen. By law (the Speedy Trial Act), criminal trials receive priority over civil cases and the COVID pandemic has effectively resulted in a backup of jury trials in civil cases. We hope to get a trial date within the next year.

With this and other cases, MSI has moved to the forefront in advocating for and protecting our First Amendment and Second Amendment rights against infringement at the county, state, and national levels in fundamentally important ways.

Whether advocating for our rights on public sidewalks, lobbying at the State Capitol, testifying in legislative hearing rooms, or filing legal challenges in State and Federal courts, MSI members and our organizational leadership know from personal experience that the First Amendment protects the Second Amendment, and the Fourth Amendment protects against unreasonable searches and seizures, including unlawful arrests, as is alleged to have occurred in this case.

Audit the Audit recently referenced the case in a video about filming police.

Stay tuned. Click the links below to read the relevant documents in the docket for this case. The most recent filings appear at the bottom of this list:

Case Documents and History
US District Court for the District of Maryland Case# 1:18-cv-00461-SAG

On Remand to US District Court for the District of Maryland