Privately Made Firearms in Maryland 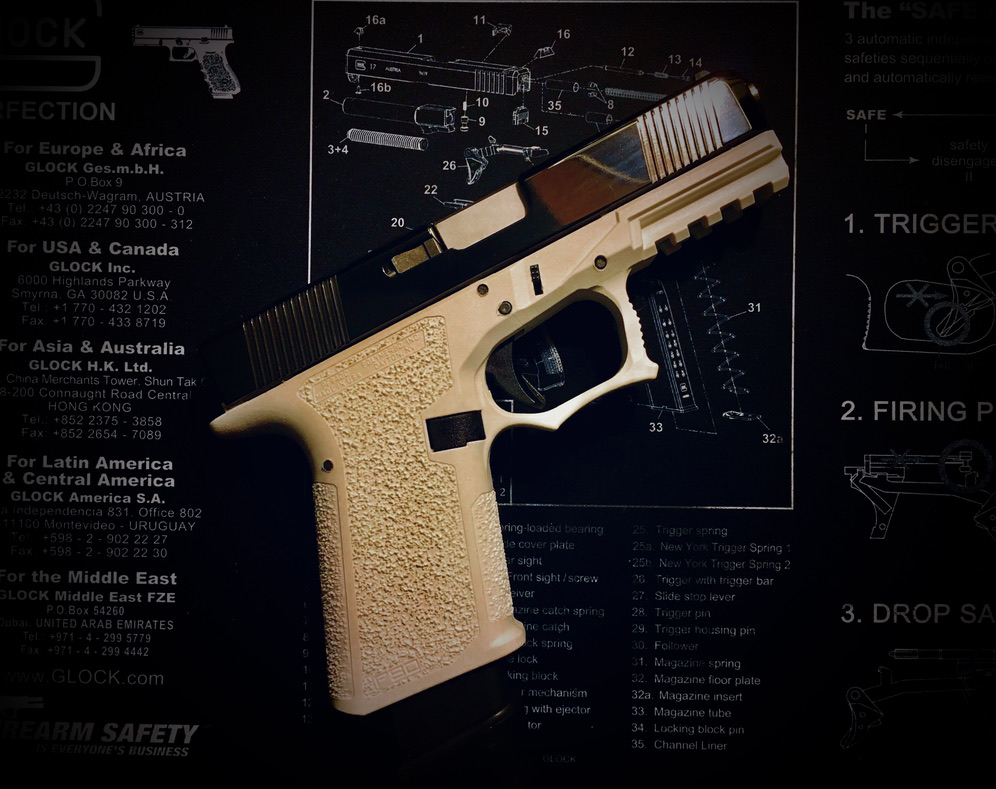 In 2022, the Maryland General Assembly passed HB425 and SB387, bills that criminalize the possession of unserialized firearms (aka "ghost guns" or "privately made firearms") starting on March 1st, 2023.

-Starting on June 1, 2022, no firearm and no "unfinished frames and receivers" may be sold, purchased, or transferred in Maryland unless they have a serial number imprinted in accordance with federal law by a federally licensed manufacturer or importer. An "unfinished frame or receiver" is defined by the bills to mean "a forged, cast, printed, extruded or machine body or similar article that has reached a stage in manufacture where it may readily be completed, assembled, or converted to be used as the frame or receiver of a functional firearm."

The term "readily be completed, assembled, or converted" is defined in ATF Rule 2021r-05F and explained in the Department's Response. Find a summary from the ATF HERE. Section 3 of HB425 and SB387 expressly require that this Maryland law be construed to be "consistent" with these ATF rules and thus will cover whatever the ATF Rule defines as an article that can be "readily" completed, assembled, or converted into a functional firearm. Under the bills, a sale, purchase, or transfer of such an unserialized firearm or unserialized unfinished frame or receiver on or after June 1, 2022, is punishable by up to five years imprisonment and a $10,000 fine, per firearm. The ATF Rule is effective as of August 24, 2022. See 87 Fed. Reg. at 24652.

The ATF Rule goes into elaborate detail in defining the terms "readily," "frame" and "receiver." See 87 Fed. Reg. at 24734, amending 27 C.F.R. 478.11 (defining "readily" to mean "[a] process, action, or physical state that is fairly or reasonably efficient, quick, and easy, but not necessarily the most efficient, speediest, or easiest process, action, or physical state," and then goes on to provide a list of vague "factors" to be considered in applying this test), and 27 C.F.R. 478.12 (defining "frame" and receiver"). As an example, the ATF Rule expressly includes within its definition of a frame or receiver any "kit containing a partially complete or disassembled billet or blank of a frame or receiver that is sold, distributed, or possessed with a compatible jig or template is a frame or receiver, as a person with online instructions and common hand tools may readily complete or assemble the frame or receiver parts to function as a frame or receiver." 87 Fed. Reg. at 24739 amending 27 C.F.R. 478.12(c). Another example: "A billet or blank of an AR–15 variant receiver without critical interior areas having been indexed, machined, or possessed with instructions, jigs, templates, equipment, or tools such that it may readily be completed is not a receiver." (Id.). The ATF Rule provides other examples as well. If in doubt, read the ATF Rule closely and consult legal counsel. Again, the Maryland law is to be interpreted to be "consistent" with the ATF Rule, so if the item is a "frame" or a "receiver" or can be "readily" converted into a frame or receiver under the ATF Rule, then it is covered by the Maryland law. If the item is not covered by the ATF Rule, then it is likewise not covered by Maryland law.

-Starting on March 1, 2023, the bills will also ban the mere possession of every unserialized firearm or unfinished frame or receiver (as defined above). Firearms manufactured prior to October 22, 1968 (when the Gun Control Act of 1968 was signed), and antiques are exempted.

To retain possession, an owner must make use of one of two alternatives to get the item serialized:

Failure to comply with these requirements applicable to possession is punishable by up to 2 years imprisonment and a fine of up to $10,000, per firearm. Conviction of this possession offense does not result in a lifetime firearms disqualification under federal or state law. Neither the ATF Rule nor the Maryland law actually requires an FFL to participate. A willing FFL is free to charge a fee in any amount. You can read more on what the bill does in a prior write-up by MSI HERE.

MSI's Take: We think it likely that relatively few FFLs will actually participate in these imprinting schemes, particularly after August 24, 2022, when the ATF Rule goes into effect. Under current federal law, only a federally licensed manufacturer or importer may serialize a firearm. Most dealers in Maryland are neither. Under the ATF Rule, after August 24, 2022, the ATF will also permit a gunsmith to imprint serial numbers. In contrast, the Maryland law basically allows any FFL to imprint these markings under the zip code alternative, but as a practical matter only manufacturers, importers, or gunsmiths are likely to have access to the expensive engraving machinery and have the expertise necessary for serialization. The ATF Rule does not require manufacturers, importers, or gunsmiths to accept possession of any unserialized firearm.

As of its effective date, the ATF Rule requires that the FFL include any PMF in his A&D books and imprint a serial number that includes part of the FFL's license number. See 87 Fed. Reg. 24742, amending 27 C.F.R. 478.92(a)(2) ("The serial number must begin with the licensee’s abbreviated Federal firearms license number, which is the first three and last five digits, as a prefix to a unique identification number, followed by a hyphen, e.g., ‘‘12345678-[unique identification number]’’). Under the ATF Rule, it is far from clear that any FFL, including manufacturers, importers, and gunsmiths, are allowed to imprint and record just the Maryland zip code identification number. That number and method of identification simply do not include the FFL's license number. The ATF Rule does provide that a licensee may use an existing number already on a PMF by adding the licensee's FFL license number as a prefix to a number otherwise mandated by State law or already engraved by another licensee or even a non-licensee. See 87 Fed. Reg. 24711. In sum, it is relatively clear that as of August 24, 2022, no manufacturer, importer or gunsmith will mark any PMF with simply the zip code number allowed by HB425/SB387. The ATF Rule requires the licensee to record the identification number in its A&D books. 87 Fed. Reg. at 24746, amending 27 C.F.R. 478.125(i). The number to be recorded is the number that includes the licensee's FFL number and not some other number. Only in that manner would the traceability objectives underlying the ATF Rule be served. See 87 Fed. Reg. at 24669.

Moreover, while the Maryland law would seemingly permit zip code identification marking by any FFL, we have found nothing in the ATF Rule that permits FFLs who are not manufacturers, importers, or gunsmiths to perform any identification imprinting. The Rule redefines a "gunsmith" to be an entity that may perform this service, but pointedly does not redefine other types of FFLs so as to permit this service. The implication is that only gunsmiths and manufacturers and importers may perform identification imprinting. This conclusion is reinforced by the Rule's statement that "licensed dealer-gunsmiths, manufacturers, and importers" may make "same-day adjustments to repairs of unmarked PMFs without marking them as long as they do not accept them into inventory overnight and they are returned to the person from whom they were received." 87 Fed. Reg. at 24730. That same discussion makes plain that these types of licensees must enter such PMFs in their A&D books if the PMF is accepted for marking, regardless of whether it is a same-day marking. (Id.). While it is reasonable to read the ATF Rule as applicable to all dealers, see 87 Fed. Reg. at 24742, amending 27 C.F.R. 478.92(a)(2), licensees who are not gunsmiths, manufacturers or importers may not perform the actual marking, but rather must contract out marking services to a gunsmith, manufacturer or importer. The ATF Rule makes that abundantly clear when it acknowledges that “most FFLs do not have gunsmiths on staff,” and states that“a portion of the [FFL] population will need to contract for gunsmithing services.” 87 Fed. Reg. at 24719. An FFL dealer licensee who is not a gunsmith and who is not willing to “contract for gunsmithing services” is, of course, free to refuse to accept any PMF into its inventory. See 87 Fed. Reg. at 24706 (“Nothing in this rule requires licensees to accept PMFs into inventory . . . .”). Indeed, if all FFLs of any type were allowed to do this marking, there would be no reason to carve out Type 01 gunsmiths for special treatment in the Rule. Thus, while the Maryland law may allow any FFL to do imprinting, nothing in the ATF Rule would allow such an FFL who is not a licensed manufacturer, importer, or gunsmith to do so. Federal rules for imprinting serial numbers are also highly specific and demanding, effectively requiring expensive engraving machinery and skill of type that only manufacturers, importers, and gunsmiths are likely to possess. All these serial number requirements create legal risks for the FFL, as any failure to follow the ATF rules would risk the loss of the FFL's federal license. We see lots of potential legal traps for the unwary FFL.

The few FFLs willing to bear these risks are likely to charge a significant fee (who can blame them?). Given that there are untold thousands of owners and tens of thousands of unserialized firearms and "unfinished frames or receivers" in Maryland, we doubt that most existing owners will be able to obtain serialization services from a qualified FFL by March 1, 2023. That will be particularly true for owners of all-polymer frames, as federal rules effectively require a metal surface for engraving. The ATF Rule, for example, states: "An acceptable method of identifying a PMF is by placing the serial number on a metal plate that is permanently embedded into a polymer frame or receiver, or other method approved by the Director." 87 Fed. Reg. at 24742, amending 27 C.F.R. 478.92(a)(2). Such metal plates may well be lacking.

Owners who are unable to obtain serialization will be required to destroy these firearms (or unfinished receivers), sell them to an FFL, move them out of the State, or surrender them to a State law enforcement agency. Once again, the law-abiding are being criminalized by irrational Maryland gun-control policies based more on hysteria and gun hatred than on rational thought.

**​NEW: ​​UNTRACEABLE FIREARM (a.k.a. GHOST GUNS) INFORMATION**
​
On June 1, 2022, Senate ​Bill 387 (Untrace​able Firearms) takes effect and adds Subtitle 7 to Title 5 of the Public Safety Article. This new law expands the definition of a firearm, restricts unfinished frames or receivers (commonly referred to as 80% lowers or ghost guns) until certain federal regulations are established, and requires a certain serial number or personal identification number to be affixed on privately made firearms and unfinished frames or receivers by a Federal Firearms Licensee (FFL) authorized to provide marking services by a certain date. Additional details and the final version of Senate Bill 387 can be found by clicking the following links:
​FFLs providing marking services as per PS 5-703(B)(2)(II)(1)(A-C) are reminded that this is a gunsmithing service and that the imprinting of the State mandated personal identification number is not associated with the Licensee's FFL number. The customer presenting the PMF or unfinished frame or receiver to the FFL, shall provide the FFL with the alphanumeric characters to imprint as per PS 5-703​. FFLs are advised that the personal identification number shall be imprinted on a single line in the following manner:
E​​xample of Personal Identification Number Format: 21208MSP001
Applicants wishing to register their privately made firearms and unfinished frames or receivers in accordance with PS 5-703​, please click the following link to the Licensing Portal​.
Applicants will be required to provide the name and FFL number of the FFL who imprinted the State mandated personal identification number on the firearm that they are registering. Privately Made Firearm and Unfinished Frame or Receiver applicants can review step-by-step instructions on how to submit this type of application to the Licensing Portal by clicking the following link: PMF & Unfinished Frame or Receiver Instructions

Not an MSI member yet? Join here!