✅ SB456 Firearms - Handgun Qualification License - Firearms Orientation Component
Senator Jack Bailey
MSI SUPPORTS this bill!
Hearing scheduled for 2/16 at 1pm
Signup to testify between 2/15 at 4pm and and 2/16 by 10am with your MyMGA Account
For more on how to testify and signup, read our guide. 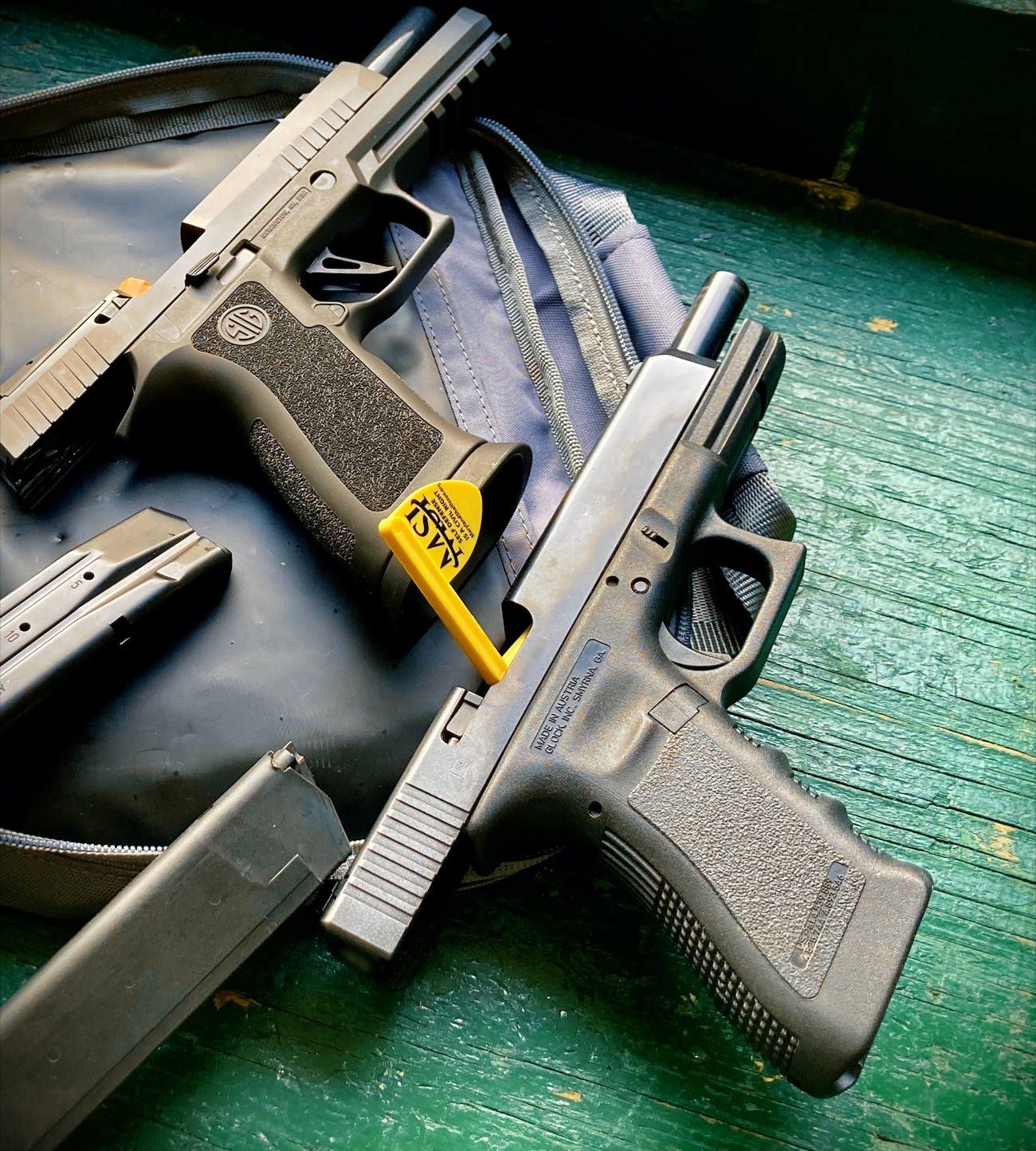 The HQL Statute and the Bill

This bill would amend MD Code, Public Safety, 5-117.1 (HQL statute).  That Section prohibits law-abiding, responsible Maryland citizens from acquiring a handgun unless they have a Handgun Qualification License (“HQL”). Md. Code Ann., Pub. Safety, § 5-117.1(c).  Subsection (d) imposes training requirements, including a (i) a minimum of 4 hours of instruction by a qualified handgun instructor” consisting of “(ii) classroom instruction on: 1. State firearm law; 2. home firearm safety; 3. handgun mechanisms and operation; and (iii) a firearms orientation component that demonstrates the person’s safe operation and handling of a firearm.”  In regulations, the Maryland State Police have added a new and additional live-fire training requirement, mandating that the HQL applicant “safely fires at least one round of live ammunition.”  COMAR 29.03.01.29(C)(4). That live round requirement is not found in the statute.

The bill would allow instructors to use live fire in teaching the HQL class, providing that the class “MAY INCLUDE THE USE OF LIVE OR INERT AMMUNITION.”  Instructors do this now as HQL instruction is sometimes combined with instruction for the much longer (8 hours) NRA Basic Pistol course, in which live fire is a substantial part. The bill, however, goes on to provide that live fire is not required in order to satisfy the training requirement, stating that “A PERSON MAY NOT BE REQUIRED TO FIRE ROUNDS OF LIVE AMMUNITION AS PART OF THE FIREARMS ORIENTATION COMPONENT UNDER PARAGRAPH (1)(III)3 OF THIS SUBSECTION.” As explained below, this provision is fully consistent with the language and legislative history of the HQL legislation and will broaden the availability of basic firearms training to underserved portions of the Maryland community which have be unable to obtain training because of the live fire requirement.

In the interests of full disclosure, we note that the live-fire requirement, along with the rest of the HQL statute, is presently being challenged by MSI in federal court. See MSI v. Hogan, 2017 WL 3891705 (D. MD. 2017) (denying the State’s motion to dismiss).  The district court, in a later decision, held that the plaintiffs lacked standing without reaching the merits of the constitutionality of the HQL statute. That decision was very recently reversed on appeal.  See MSI v. Hogan, 971 F.3d 199 (4th Cir. 2020).  On the merits, we believe that it is highly likely that the Supreme Court will, in an appropriate case, soon make clear that the “text, history and tradition” test is controlling in determining the constitutionality of gun control legislation – not tiers of scrutiny. The Supreme Court may well clarify the appropriate standard of review for Second Amendment cases in its upcoming decision in NYSRPA v. Bruen, No. 20-843, cert. granted, 141 S.Ct. 2566 (2021). Bruen was argued November 3, 2021, and a decision is expected by June of this year. See also ANJRPC v. Bruck, No. 20-1507 (SCt.) (challenging New Jersey’s ban on so-called large capacity magazines; the petition for certiorari in that case is presently being held by the Supreme Court pending a decision in Bruen).

Indeed, four members of the Supreme Court recently employed this very approach in NY State Rifle & Pistol Ass’n, Inc. v. City of New York, 140 S.Ct. 1525 (2020), where a majority of the Court held that the case was mooted by the repeal of the offending City of New York ordinance. See Id. at 1526 (Kavanaugh, J.) (concurring in judgment of mootness, but agreeing with Justice Alito’s discussion of Heller and McDonald on the merits; Id. at 1540-41 (Alito, J., dissenting from the judgment of mootness but noting further on the merits that the City’s ordinance violated the Second Amendment under Heller and McDonald).  Justice Thomas made the same point recently in Rogers, et al. v. Grewal, 140 S.Ct.1865, 1868 (2020) (Thomas, J., dissenting from denial of certiorari).  See also Heller v. District of Columbia (i.e. “Heller II”), 670 F.3d 1244, 1269 (D.C. Cir. 2016) (Kavanaugh, J., dissenting) (“In my view, Heller and McDonald leave little doubt that courts are to assess gun bans and regulations based on text, history, and tradition, not by a balancing test such as strict or intermediate scrutiny.”).  With Justice Barrett now joining the Court, we believe that a solid majority of the Court will adhere to these principles when the issue is presented.  See Kanter v. Barr, 919 F.3d 437, 452-53 (7th Cir. 2019) (Barrett, J., dissenting).

The HQL statute will likely fail under the text, history and tradition test. Indeed, in the HQL litigation, the State’s Office of the Attorney General has not even attempted to argue that the HQL satisfies this test. Eliminating the live fire requirement will simply help the State defend this statute in this ongoing litigation. A failure to enact this bill will help MSI win the case on the merits.  Should MSI prevail, in whole or in part, the State would be liable for substantial attorneys’ fees and costs under federal law, 42 U.S.C. § 1988.

The Live-Fire Requirement Is Not Authorized By the HQL Statute

It is well-established in Maryland law that “[a]n agency’s authority extends only as far as the General Assembly prescribes.” Thanner Enters., LLC v. Balt. Cty., 995 A.2d 257, 263 (Md. 2010). Thus, an agency’s rule or regulations cannot “contradict the language or purpose of the statute.” Medstar Health v. Md. Health Care Comm’n, 827 A.2d 83, 96 (Md. 2003).  Here, the Maryland State Police has grafted onto Section 5-117.1(d)(3)(iii)’s requirement of a “firearms orientation component” an entirely new “practice component” under which the applicant must safely fire “at least one round of live ammunition.” COMAR 29.03.01.29C(4). Although Section 5-117.1(n) provides that “[t]he Secretary may adopt regulations to carry out the provisions of this section,” it does not allow the Maryland State Police to add new “provisions,” such as adding “a practice component” so as to mandate live-fire.

The State Police rule is directly contrary to legislative intent. As originally proposed, the HQL bill required a safety course that included “a firearms qualification component that demonstrates the person’s proficiency and use of the firearm.” 2013 Leg. Sess. SB 281 (First Reader) at 17.9. By common usage of these terms, a “qualification component” that demonstrates “proficiency” calls for live-fire. This “qualification component” was deleted by the General Assembly, however, and Section 5-117.1(d)(3)(iii) was changed to its current language by amendment in the House of Delegates proffered by then-Delegate McDermott. Chapter 427 of the 2013 Laws of Maryland. See http://mgaleg.maryland.gov/2013rs/amds/bil_0001/SB0281_48392701.pdf.  The debate on the floor of the House of Delegates confirms that the amendment was intended to eliminate a live-fire requirement that would have been associated with the “proficiency and use” language of the original bill. See General Assembly of Maryland, 2013 Regular Session Proceedings – House Audio, April 2, 2013, Session 2, at 19:05 (April 2, 2013). The General Assembly’s rejection of this language in the law that passed means that live-fire training exceeds the scope of the statutory grant. This body should insist that the State Police follow the law that the General Assembly actually passed, not the law that the State Police wish passed.

The Live-Fire Requirement Is Discriminatory

The live-fire requirement is not only unauthorized, it effectively discriminates against residents of the City of Baltimore and the poor populations in Maryland in the urban areas of Maryland. Training without a live-fire requirement can take place anywhere, while training that must include live-fire can only take place at a firing range, the availability of which is highly limited (there are none in Baltimore City). The need for a range, in turn, acts as a complete barrier to the acquisition of a HQL License by persons, especially the poor, minorities and the disadvantaged, who live in areas, such as Baltimore and most of urban Maryland, where access to a shooting range is highly limited or non-existent. Nearly all the established ranges in Maryland are privately owned and those ranges typically restrict access to members and their guests. Range access is also expensive and requiring it means that the cost of the training is likewise more expensive as the instructor must accord for the cost of obtaining range access.

Indeed, the discharge of such live ammunition, required by the State Police regulation, is flatly banned by local law in the urban portions of Maryland, including all of the City of Baltimore, Section 59-2 of Article 19, Baltimore Ordinances, all of Prince Georges County, County Code Section 14-142(a), most of Montgomery County, County Ordinances Ch.57,

There is no justification for a live-fire requirement that imposes these sorts of burdens. Whatever the merits of the State Police requirement, the residents of Baltimore and the urban areas of Maryland should not be placed at such a profound disadvantage. Persons with means will be able to pay a private instructor who will have access to a range. These persons will have access to transportation, while the disadvantaged community may find travel much more difficult.  Cost will not be a barrier for individuals with means, but costs of live fire impose a barrier for those who cannot afford the prices instructors have to charge more in order to offer live fire at a range. Persons with means will be able to obtain an HQL. Poorer Marylanders are out of luck. That is intolerable.  Like it or not, under the Supreme Court’s decision in District of Columbia v. Heller, 554 U.S. 570 (2008), all law-abiding, responsible adult citizens, including residents of the urban areas of Maryland, have a right to buy a handgun for self-defense. Period.  Full stop. Not even the State Attorney General has disputed that basic premise in the MSI litigation. That right should be available to every law-abiding responsible citizen, regardless of whether they live in Baltimore, other parts of urban Maryland or somewhere else in Maryland. By reversing the discriminatory requirement of live-fire, this bill will help ensure that right is available to all law-abiding citizens, just like other constitutional rights. The HQL statute will eventually fail to survive constitutional challenge. In the meantime, the law-abiding citizens of Baltimore and of the other urban portions of Maryland should enjoy the same rights as enjoyed by persons with means. We urge a favorable report.