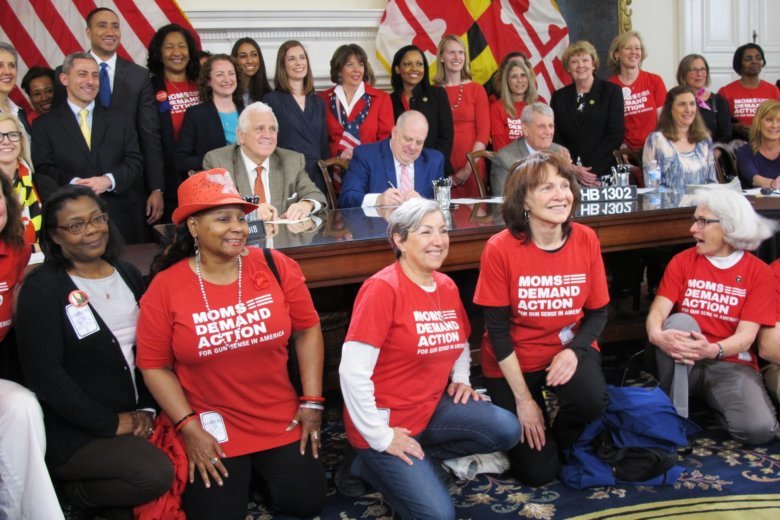 Basically, under that bill as it became law, virtually anyone can ask a law enforcement officer to file an ex parte petition with a state district court judge or commissioner and allege that the gun owner poses an immediate danger to himself/herself or others because (and only because) he or she possesses firearms.  If the court issues the order, the police can show up on the doorstep and seize the person’s firearms without notice or warning.  HB 819 did not abolish the Board but added an additional layer of “de novo” review that allows either the applicant or the Maryland State Police to appeal the Board’s decision to the Office of Administrative Hearings for a new, de novo formal hearing before a state Administrative Law Judge (ALJ).  That will give the MSP a second bite at the apple to appeal Board decisions they don’t like without going to court.  Decisions of the ALJ can then be appealed to the court. The bill also creates new time deadlines for the Board and the ALJ to hear cases.

And that is not the only bad news.  The General Assembly passed and Governor Hogan signed into law SB707 (found HERE). which purports to ban bump stocks and other so-called "Rapid Fire Trigger Activators.  We testified against that bill (that testimony can be found HERE).  Our opposition and that of others did result in one significant amendment to the original bill, viz., the bill now makes clear that a Rapid Fire Trigger Activator does NOT include a "SEMIAUTOMATIC REPLACEMENT TRIGGER THAT IMPROVES THE PERFORMANCE AND FUNCTIONALITY OVER THE STOCK TRIGGER.”  The original bill was also amended at the last minute to exempt from its ban existing owners "APPLIED TO THE FEDERAL BUREAU OF ALCOHOL, TOBACCO, FIREARMS, AND EXPLOSIVES BEFORE OCTOBER 1, 2018, FOR AUTHORIZATION TO POSSESS A RAPID FIRE TRIGGER ACTIVATOR” and "RECEIVED AUTHORIZATION TO POSSESS A RAPID FIRE TRIGGER ACTIVATOR FROM THE FEDERAL BUREAU OF ALCOHOL, TOBACCO, FIREARMS AND EXPLOSIVES BEFORE OCTOBER 1, 2019.”  We and others have checked and it seems the ATF will not accept any such requests for such “authorization.”  - See HERE  The ATF has confirmed the position in correspondence with MSI.  So “Catch 22” for existing owners.  The irony is rich, however, that this reality with the ATF also makes this new bump stock ban all the more open to legal attack under the Due Process Clause and the Takings Clauses of the Federal and Maryland Constitutions.  Any legal attack on the red flag bill will have to await a case in which it is abused as only such persons will have the standing to challenge it in federal court.  We are sure that this law will be abused in short order, just as similar gun seizure protective orders in domestic relations cases are often abused.

There is some good news in the bullets we managed to dodge this year at the General Assembly.  For the second year running, the campus-carry ban (HB904) passed the House of Delegates but failed to become law when it was stranded in the Senate Rules Committee.  We strongly opposed that bill (opposition found HERE).  We also opposed HB 991 and its cross-filed twin, SB 1062 (Opposition found HERE) that would have banned the mere possession of any magazine that could hold more than 10 rounds.  Under current law (MD Code Criminal Law Section 4-305), a person may not manufacture, sell, offer for sale, purchase, receive, or transfer such magazines, but possession is not banned.  We also opposed successfully, for the third year running, the attempt to ban the possession of black powder guns by disqualified persons (HB 402 and SB 448), pointing out that such a ban would be hopelessly ineffective given that such guns are not even considered to be firearms under federal law. Of course, it is an election year, so all of the good the bills never made it out of committee.  The sole exception was Senator Hough’s and Delegate Rey’s bills (HB 29 and SB 27) that would have allowed a person to file an application for a carry permit without first obtaining the expensive 16 hours of training.  If that person received preliminary approval, the applicant could then get the training and the permit.  That bill passed the Senate almost unanimously (Senator Ramirez being the sole nay vote), but then was "Christmas treed” in the House with non-germane amendments by antis, forcing the sponsors to abandon the effort.  We will try again next year.  Not even the hardcore antis seriously oppose this “common sense” bill.  It is greatly frustrating that all the good bills that were submitted this year (and there were many) never made it out of committee.