March Litigation Update and Other News 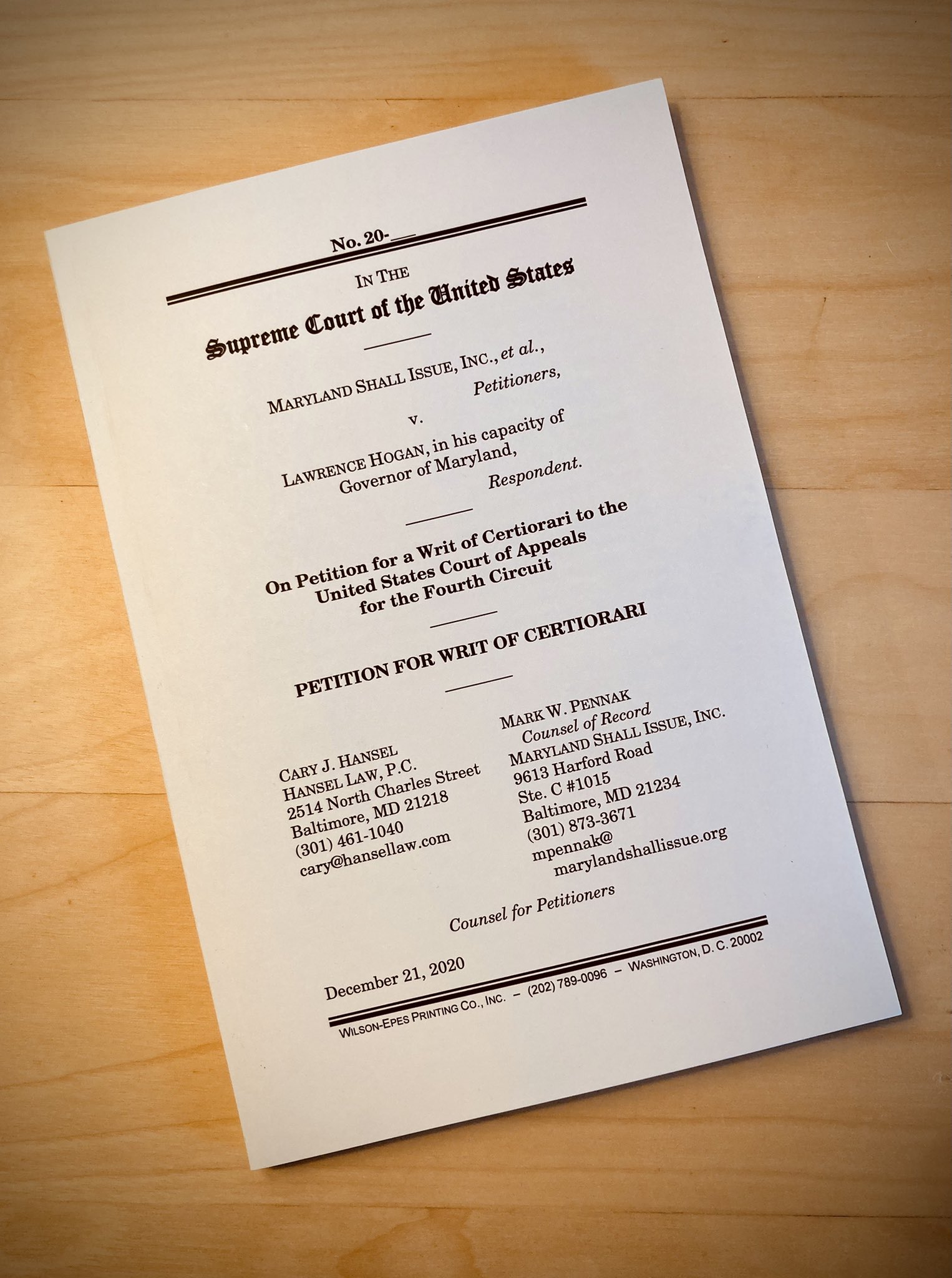 1. The Rapid Fire Trigger Activator case:  The Supreme Court case is MSI v. Hogan, No. 20-855 (US).  There, MSI and the individual plaintiffs have challenged as a Taking Maryland's ban on possession of previously lawfully owned and acquired "rapid fire trigger activators."  We lost that challenge in the Fourth Circuit in a split 2-1 decision, with a compelling and lengthy dissent by Judge Richardson. MSI v. Hogan, 963 F.3d 356 (4th 2020). We have thus filed a petition for certiorari with Supreme Court, asking the Court to review the Fourth Circuit's ruling.  MSI also filed an amicus brief with the Court of Appeals for the Federal Circuit in The Modern Sportsman, LLC v. United States, No. 20-1077 (Fed. Cir.), where a similar Takings issue is pending arising from the ATF's regulatory ban on bump stocks. That case was heard by the Federal Circuit at oral argument on December 8 and a decision is pending. The theory is simple:  If the government is going to ban the possession of lawfully acquired private property and thereby destroy all property rights in that property, then the State should pay for it. The State's Opposition to our petition for certiorari is due on March 29, after which we will file a reply brief. We may have a decision by the Court on whether to hear the case in late April or May. If the petition is granted, the case will be fully briefed over the summer with oral argument likely in the Fall.

2. The HQL litigation:  MSI, along with individual plaintiffs and Atlantic Guns in Rockville, have challenged the constitutionality of the Handgun Qualification License requirement that was enacted as part of the so-called Firearms Safety Act of 2013. The district court initially dismissed the case on grounds that none of the plaintiffs had standing to sue and thus refused to reach the merits.  We appealed and, this last summer, that standing ruling was reversed by the Court of Appeals for the Fourth Circuit. MSI v. Hogan, 971 F.3d 199 (4th Cir. 2020). On remand, the parties have filed cross-motions for summary judgment and motions to strike. Those proceedings and briefings are still in progress. After full briefing, the district court may hold a hearing and will render a decision in due course.

3. The First Amendment suit:  MSI, along with the Hulbert brothers, filed suit in federal court challenging the arrests that took place in Annapolis in 2018 of the Hulberts, who were peacefully and lawfully demonstrating on a public sidewalk (a.k.a, a "public forum"). After all, the First Amendment protects the right to advocate in support of the Second Amendment. The arrests at issue in this case thus chill advocacy by MSI and by every MSI member. The federal district court has already denied the defendants' earlier attempt to dismiss the case. Hulbert v. Pope, 2019 WL 1409707 (D. Md. 2019). Although the case was delayed by the COVID 19 pandemic, the parties have completed extensive pre-trial discovery and, as expected, the defendants have recently moved for summary judgment. That motion has been fully briefed and is awaiting a decision by the federal judge.  When that motion fails (as it should), we intend to take this case to a jury and recover substantial damages and equitable relief.

4. The Challenge to the "Good and Substantial Reason" case:  Last, but hardly least, MSI has joined with the Firearms Policy Coalition, the Citizens Committee for the Right to Keep and Bear Arms, the Second Amendment Foundation, and a number of individuals to challenge the constitutionality of Maryland's "good and substantial reason" requirement for the issuance of a wear and carry permit. The case name is Call v. Jones, No. 20-3304 (D. Maryland). The point of that suit is to challenge the Fourth Circuit's prior decision in Woollard v. Gallagher, 712 F.3d 865 (4th Cir. 2013) (in which the court sustained the requirement) by bringing this issue to the Supreme Court.  As expected, on March 19, the district court dismissed the complaint on the basis that Woollard was controlling. The plaintiffs will be filing a notice of appeal with the Fourth Circuit, which will likely summarily affirm on the basis of Woollard, just as it did in Malpasso v. Pallozzi, 767 Fed. Appx. 525 (4th Cir. 2019), where the same issue was raised by different parties. Once the Fourth Circuit acts on this appeal, a petition for certiorari with the Supreme Court will be appropriate. Stated simply, the Woollard decision is in direct conflict with the D.C. Circuit's later decision in Wrenn v. District of Columbia, 864 F.3d 650, 661 (D.C. Cir. 2017), where the court held that the Second Amendment protected “the individual right to carry common firearms beyond the home for self-defense—even in densely populated areas, even for those lacking special self-defense needs.” As a result of Wrenn, the District of Columbia is now a "shall issue" jurisdiction, just like 42 states. Sooner or later, that will likewise be the law in Maryland. Indeed, this very issue is presently before the Supreme Court on a petition for certiorari filed in NYSRPA v. Corlett, No. 20-843, docketed Dec. 23. 2020) (U.S.).  That petition will likely be considered by the Court at a Friday conference in April.  So stay tuned. If certiorari is denied in Corlett, we will be presenting the same issue in this case. The Second Amendment cannot mean one thing in 42 states (and in D.C.) and something else in Maryland!
License, Registration, and Permit Renewals
Recently, Governor Hogan issued new executive orders related to COVID-19 that undo the suspension of expiration dates for all licenses issued by the State. If your carry permit would have expired over the last year, you must now submit a renewal application for their permit by June 30th, 2021. To learn more, see the notice from the Maryland State Police HERE.
April MSI Membership Meeting
MSI will hold its next membership meeting online via Zoom on April 10th, 2021 at 1:30 pm. Links to join the meeting will be distributed to all active paid members only via email, so be sure that your current profile information on the MSI website is up to date. We will be giving updates on where the gun bills stand in the legislature, litigation updates, plans MSI has moving ahead, and much more.
Upcoming Events
If interested in volunteering, reach out to . Booth volunteers who do four shifts in a year get their MSI membership comped! They also may get into the show for free.

AGC Range Day is Sunday, April 11 from 8 am - 12 pm, please come out to help get the range ready for the upcoming year. Volunteers are welcomed to stick around to enjoy shooting on the 100yd range with us from 1 pm - 4 pm and those who help do earn credit toward their badge fees with the AGC.

If you would like to volunteer, please contact Michael Burke at  for more details and let him know what time you will be able to stop by so he can provide our club volunteer info to AGC.