Baltimore City kindly offers, "Give me your tired, your poor, your huddled masses yearning to breathe free."

Back in 2013 just as the push for gun control nationwide was heating up and before our beloved Firearms Safety Act of 2013, I managed to buy some 20rd magazines for an AR15 for $3 a piece. They were very, very cheap mags not known for their reliability or sturdiness, but did kinda work. They seldom went to the range with me, mostly relegated to a storage box neglected. These weren’t being kept for defense or for training. Just placeholders for a rainy day.

Fast forward to December 2018 and as fortune would have it, the Baltimore Police Department announced a “gun buyback” (buyback is a cute term, but more on that later) that would take place just before the holidays. It’s their first in six years. Curious, I checked the link on the BPD twitter and was floored with what I saw. 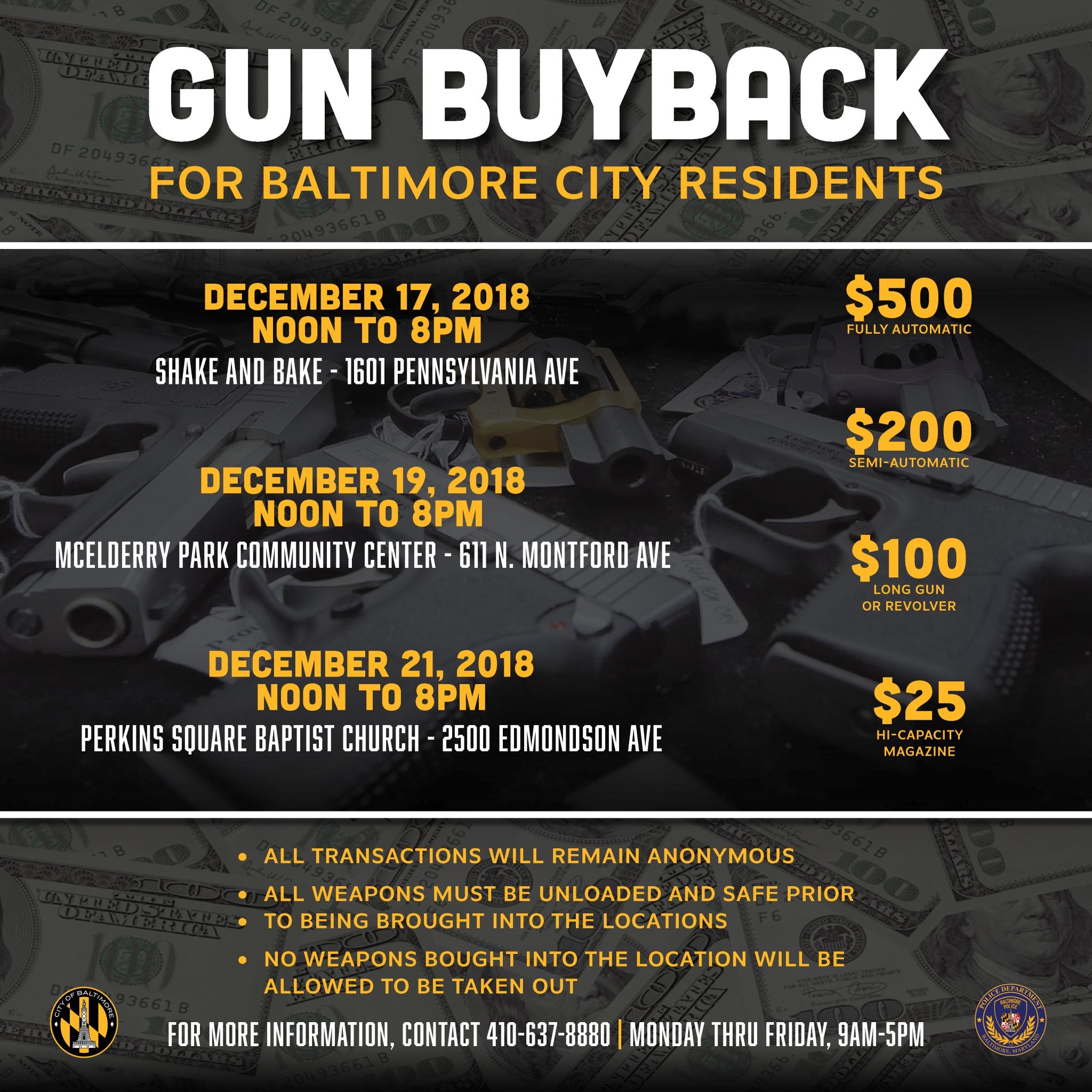 BPD was shelling out $500 for fully-automatic firearms (No loss on investment there!), $200 for semi-automatic rifles and pistols, $100 for other long guns and revolvers, and $25 per “hi-capacity” magazines. Aside from the price on full-autos, the other gun prices were pretty typical of many of these events in others cities, but that price on mags really stood out. $25 for any magazine over 10-rounds? Holy cow. I’m about to be a wealthy man!

A couple of days after BPD made their original post, it seemed I wasn’t the only one as excited about potentially doubling my entire roster of magazines with the earnings from their generous payout. Enough people must have called in asking them about a limit because the BPD updated their site to say that mags are now limited to two per person. Still, that’s $50 for mags I spent $6 on years ago. Pretty awesome, though I still didn’t know how the $50 was being paid out.

On my lunch break, I headed over to 1601 Pennsylvania Ave at the Shake & Bake Family Fun Center for my nearly free money. I parked about a block away among a lot of BPD vehicles, including their mobile command unit and some other unmarked vehicles. With the potential for so many people to be stopping in Druid Heights with guns and leaving with money, the presence of so many officers made sense. A handful of officers stood at the entrance, some in tactical uniforms sans helmets and scary rifles. An officer waved me over to the handicap ramp to the entrance. Guided by the ramp and some concert venue style fences, I headed into the lobby. Inside were more fences snaking back and forth, making a pretty easy labyrinth. Another officer greeted me as I made like Pac-Man. There were a dozen or so people ahead of me, some holding shoe boxes and others with trash bags with wooden gun stocks peaking out. A few of the attendees were in their work uniforms and presumably on their lunch breaks, just like me. One-by-one, an officer and a cadet waved each of us into the main room where they were processing the firearms and magazines. Only 5 or minutes go by before I’m called to enter. In the room were three tables with one for taking in firearms, another for writing claim tickets, and the last one with cashiers. Behind all were even more (a ton more) BPD personnel in all flavors of police garb handling the freshly minted armory of misfit guns, just out of sight.

Two tactical officers stood at the firearms table. On it, next to where I’d be handled, was an old single-shot break-action shotgun with a wooden stock. Someone was getting $100 for it, probably more than they’d ever get selling it anywhere else. “What do you have?” The officer on the left side of the table looked at the little white box I had brought in and I handed it over. “Two spooky, scary 20-round magazines.” He opened it and inspected the two boxy pieces of plastic. “Two twenties,” he says to the officer at the next table over who had a stack of pre-printed papers with boxes for each of the items they were offering payment for. She puts a check-mark in the “Hi-Cap Magazine” box and writes “x2” below and hands the paper to me with a smile.

At the cashiers table were two people in suits with small Sentry-safes in front of them. One of them takes the slip from me and the other counts out $50 in crisp, new $20 and $5 Federal Reserve Notes from the safe. BPD never disclosed how people would be paid. I had read stories of other buybacks paying in debit cards, grocery vouchers, or gift certificates, but this is really the first I knew of that issued actual cash. Safe to say no one was complaining. “Who’s paying for this?” One of the well-dressed men issuing the cash looks up and kindly tells me he doesn’t know. He hands the $50 over to me and I tuck the greenbacks into my jacket. Quite satisfied, I headed back to my office with cash ready to spend on much, much better magazines.

These “buybacks” are silly in so many ways. That name, “buyback.” Our guns and mags didn’t come from the BPD, the City of Baltimore, Maryland, or anywhere else other than a manufacturer and dealer. They’re items we explicitly have a right to own and use. Sure, Maryland issues a “Not Disapproved” for handgun purchases after going thru a one-of-a-kind licensing scheme, but we have the right to them nonetheless and that right did not come from the government. Beyond naming, one has really gotta wonder what the point of this is. As I witnessed, a lot of people were bringing in guns that are old, barely functioning if at all, expendable, and more than likely not ever relied upon for self-defense. As is the case with me, most of these folks were likely looking for some extra scratch to better their firearm collection or some money for Christmas gifts or in this resident’s case, a bigger gun.

Kathleen Cairns, a journalist for Fox45 Baltimore reported that Baltimore is spending $250,000 for their three buyback days and the money is coming from the city’s general fund. Remember this the next time the city says it cannot heat its schools…

MSI Goes to the Supreme Court

Update 12/29/2020: The Supreme Court has docketed the case. https://www.supremecourt.gov/Search.aspx?FileName=/docket/docketfiles/html/public/20-855.html

On behalf of our members, Maryland Shall Issue, Inc. is proud to announce that we’ve partnered with the Firearms Policy Coalition, the Second Amendment Foundation, and Citizens Committee for the Right to Keep and Bear Arms in bringing a new legal challenge to Maryland’s unconstitutional ‘wear and carry’ permit requirements.

The ‘good and substantial reason’ requirement for issuance of a permit imposed by Maryland law has long been used to effectively disqualify the vast majority of law-abiding Marylanders of their right to carry a handgun for the lawful purpose of self-defense. The time has come to end Maryland’s subjective and discriminatory law and regulations. The people of Maryland have a fundamental right to protect themselves in public.

If you'd like to watch the voting session from earlier, you can catch it here: https://t.co/btqNs4Zliw

RT @MD_Shall_Issue: On Monday, MSI members and others testified before the Judiciary Cmte in a session that went for nearly 8 hours. We con…