YOUR ATTENTION AND ACTION ARE NEEDED IMMEDIATELY

On September 14th, 2018, United States District Court Judge James K. Bredar denied Maryland Shall Issue's motion for temporary relief against the State’s ban on possession of “Rapid Fire Trigger Activators” by SB 707, signed into law by the Governor on April 24, 2018.  This means the law will go into effect as passed on October 1st, 2018.  That's just two weeks from now. HOWEVER, while the case is pending, the judge made it clear that he believes all that’s needed to comply with the law is for the existing owner to send a letter applying for authorization to possess the "devices" covered by SB 707 to the Federal Bureau of Alcohol, Tobacco, Firearms, and Explosives (ATF) by 10/01/2018.  That is the "grandfather" clause contained in SB 707 and that was the clause that the judge seized upon in holding that MSI had failed to show the "irreparable injury" necessary for preliminary relief.  As he said at the hearing, all you have to do is "apply" to the ATF by October 1 for "authorization to possess" the "device" in order to avoid prosecution for a year.  And to the judge, it simply did not matter that the ATF has refused to receive or process any such request for "authorization" because the statute merely required the owner to "apply," not for the ATF to actually accept the application.

But, here is the rub:  The law is so vague that no one knows what it  covers.  Every gun owner in the state may possess "Rapid Fire Trigger Activator(s), and not even know it.  Such "device[s]" includes binary trigger systems, bump stocks, burst trigger systems, a Hellfire Trigger, a trigger crank, or a burst trigger system and copies thereof.  But the banned items ALSO includes any "device, including a removable manual or power-driven activating device, constructed so that, when installed in or attached to a firearm: (I) the rate at which the trigger is activated increases; or (II) the rate of fire increases.”   Yet, virtually anything you do to your firearm may "increase" the "rate of fire" by some minute amount, including cleaning it.  There is no definition for a "device" and the statute includes ALL firearms, not merely semi-automatics.   At the hearing, Judge Bredar remarked on the extreme vagueness of the State’s law as he demonstrated how GUN OIL being used to lubricate A BOLT-ACTION RIFLE to "increase" the "rate of fire" of the rifle because the action could be worked more efficiently, meaning the trigger could be manually activated faster than it could before using the GUN OIL.  The judge thus warned the State that he had real problems with how vague the statute was.   In short, we don't know what is covered by this language covering a "device" that increases the "rate of fire" and neither does the State, the judge or anyone else.  The potential for arbitrary enforcement is quite real.

And that is a BIG problem.  A conviction for the mere possession of a SB 707 "device" (whatever it means) will result in the loss of your Second Amendment rights for life.  It doesn't have to be a bump stock or the other listed devices to be covered.  And even you aren't convicted, you could still be arrested and jailed for such possession by an overzealous law enforcement officer.  It doesn't matter when or where you bought it or whether it is installed or whether it has ever been used.  It doesn't have to be a device for a semi-automatic firearm.  Mere possession in Maryland is enough.  Under the judge's ruling today, the only way any gun owner in this State can protect themselves from potential arbitrary arrest and/or prosecution under this law (SB 707) is to send in the APPPLICATION FOR AUTHORIZATION to the ATF.

All you have to do is DOWNLOAD THE APPPLICATION FOR AUTHORIZATION, fill in the blanks and send it in to the ATF at the address indicated.  To be safe, the ideal way to send it is via US Mail, return receipt requested.  But by all means, send it any way you can (and keep a copy).  If you choose to email the completed application, the address is: .  Regardless how you send it, it must be sent before OCTOBER 1, 2018.  Sending this letter does NOT mean that you are identifying yourself as owning a bump stock or any specific device.  It just means that you (like we) don't know what is covered by the SB 707 ban on a "device" that "increases" the "rate of fire."  The letter merely repeats the language set out in grandfather clause of SB 707.  And note, even if you apply for "authorization" with the ATF, the prohibition imposed on possession by SB 707 kicks back in on October 1, 2019, if "authorization" is not actually received by that time.  We already know that the ATF will not actually entertain such "applications" because it has publicly announced that it would not consider them.  But that does not and will not matter until October 1, 2019.  In the meantime, all you have to do is "apply" under the judge's ruling.

The case is not over by any means.  All the judge did was deny preliminary relief.  He did not address the merits in his ruling (other than to warn the State that they had a problem on how vague the statute was).  We are encouraged by some the judge's remarks made at the hearing.  Maryland Shall Issue will continue the fight but in the meantime, it is absolutely essential that you send this letter to the ATF as soon as possible.  Legally, it is the only way you can protect yourself from this vague statute under the judge's ruling today.  Hopefully, the case will be over by October 1, 2019 (at least in district court), so we will know more before then.

Maryland Shall Issue® is an all volunteer, non-partisan organization dedicated to the preservation and advancement of gun owners' rights in Maryland. It seeks to educate the community about the right of self-protection, the safe handling of firearms, and the responsibility that goes with carrying a firearm in public 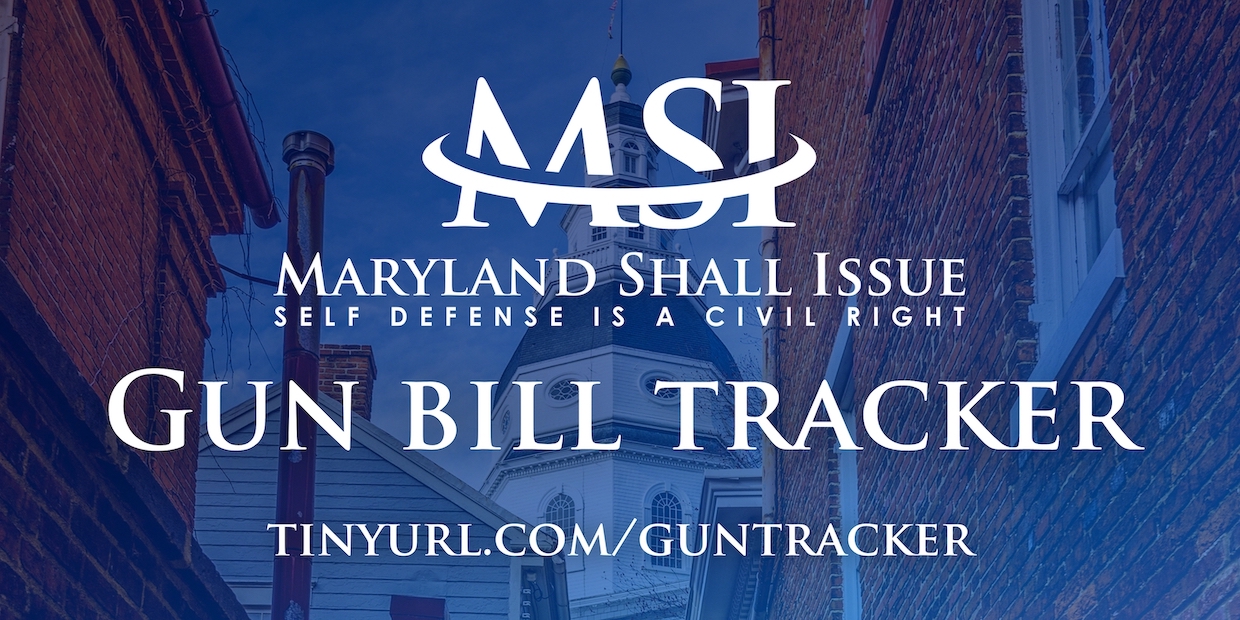